Aunalytics is excited to announce the February 2021 Daybreak release to our clients. This release will provide clients with model and site enhancement information along with any fixes to existing functionality we have included.

Query Wizard: New “In the Range of” Operator¶

The Query Wizard in the Daybreak Data Builder now supports a new operator for dates: “In the range of.” This operator serves as a placeholder for relative dates calculated from the present date when the query is executed, allowing query creators to define a range of relative dates. For example, a query could search for accounts created in the week immediately preceding when the query is run:

In addition to the predefined ranges, users can select “special” from the drop-down menu and define their own ranges using three criteria. Possible special ranges include examples such as the first quarter of last year or the week five weeks into the future.

The SQL Builder mode of Data Builder now has an autocomplete feature alongside syntax highlighting for assistance in writing SQL query code. The autocomplete feature presents a popup menu with suggestions matching the characters the user has typed. Suggestions are drawn from SQL reserved words (e.g. “SELECT”, “AVG”, or “JOIN”) as well the field names for the Daybreak datamart being queried. So for example, typing “Date” will bring up a list of suggestions beginning with the “DATE” keyword in SQL as well as the datamart field names “DateJoined” and “DateofBirth” from the Daybreak Customer Table. This feature makes writing SQL queries against the Daybreak datamarts much easier since users not need to rely as much on the datamart field names browser in the SQL editor’s schema panel. 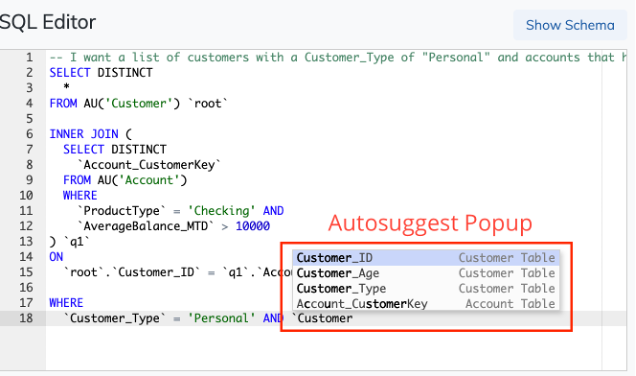 The “New Query” button previously displayed a dropdown menu from which the user could choose the desired query type: Query Wizard or SQL Editor. This drop-down has been replaced by a set of icons for Query Wizard, and SQL editor. Clicking each icon will create a new query in that mode.

Aunsight Atlas records now support a new dataset format: Parquet. Parquet is a columnar dataset format developed by the Apache Software Foundation for Hadoop-based big-data platforms (https://parquet.apache.org/). Unlike CSV files commonly used by Aunsight’s Hadoop storage clusters to date, Parquet structures data internally as columns rather than rows. Accessing and storing data in this way enhances the ability to store and operate on subsets of columns in a table. More importantly, it also allows datasets to be copied directly between the Alluxio object acceleration engine used to store and process data in pipelines and Exasol, the relational database used to process queries from the Daybreak webapp.

In addition to improving the efficiency of Aunsight data pipelines, Parquet will be an important component of a new Aunsight concept: datamarts. Parquet datasets will be used as the basis of datamarts, Aunsight objects which define and manage the structure of data as it moves between Aunsight’s big data storage infrastructure and the relational database structures which Daybreak imposes on data in order to render its structure more familiar to data consumers.

Aunsight Golden Record now allows users to configure a Transactional Workflow that can move larger datasets from a source database to the datastore of their choice while bypassing the Mapping, Matching, and Merging configuration steps. This new type of workflow supports bulk data transfers to provide fast, cloud-native data transfer from client data sources into both Amazon S3 and the Aunsight platform.