This article describes these features, especially the Web Interface in detail. Once you understand how to deploy scripts, you may wish to learn more about the syntax

The Aunsight Webapp has support for managing and evaluating AuQL Scripts. To After logging in to the Web interface and selecting the relevant context you wish to work in, click the "Script Engine" icon ( 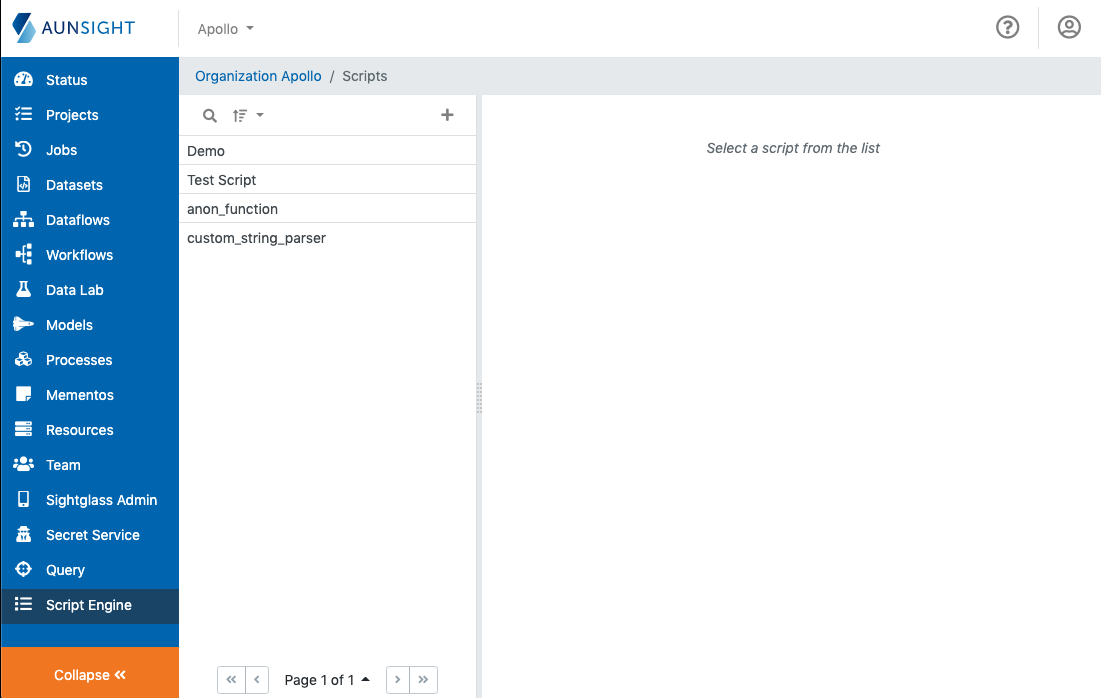 On the left side of the Script Engine workspace, you can search, sort, or create a new script. Click on the name of a script to bring up its details in the right part of the interface window. 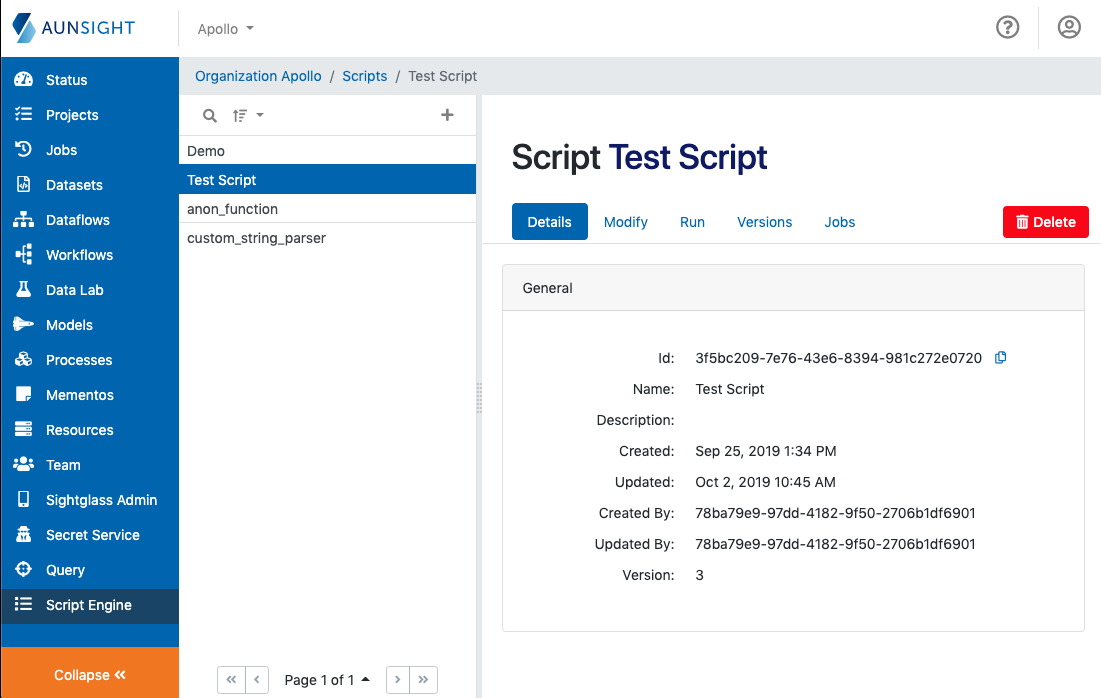 The script details page offers a variety of tabs. The "Details" tab displays basic details about the script.

The Jobs list provides a convenient way to monitor the state of jobs started to run a script. The "Jobs" tab provides a filtered view of data tracked in the Jobs workspace so that users can easily monitor when and how their scripts were run, and what the results were. The AuQL Script Engine Jobs tab shows job state ("In Progress", "Succeeded", or "Failed"), activity dates for the job, and the name of the user who ran the job (or the user who created the token used to run the job). 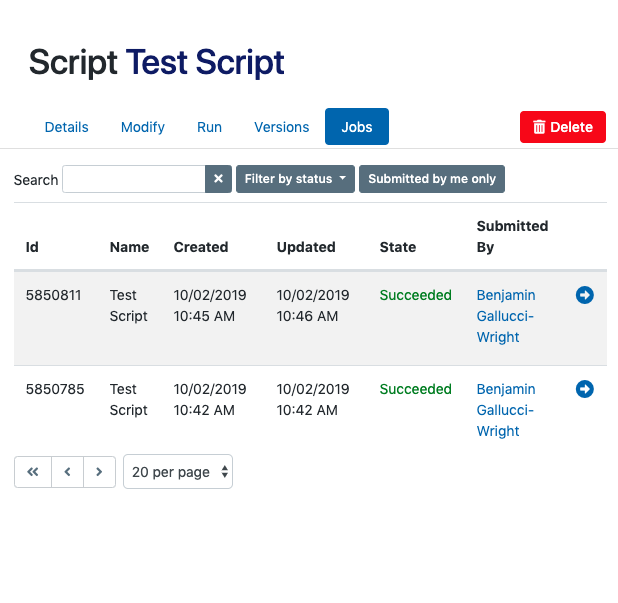 ) on the job will leave the Script Engine workspace for the Jobs workspace where you can review details of the job status. Additionally, you can view the script's output (the data returned by the return() statement of the script's main() function) at the bottom of the "Script Job Info" section of the job details tab. 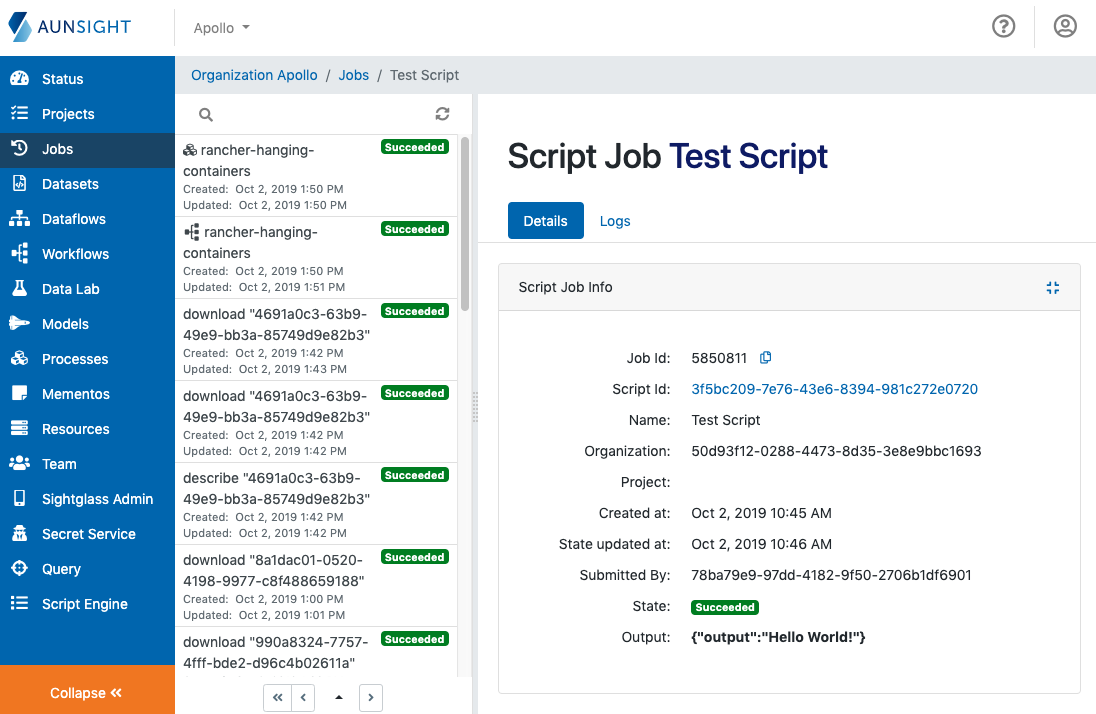 The Workflow Builder has several components related to the AuQL Scripting Engine:

The Toolbelt command line interface (CLI) has a set of commands for managing AuQL Scripts under the auql top-level command.

An example of running a script with parameters using the toolbelt:

Toolbelt exposes the following subcommands under the au2 auql command:

Developers working with Aunsight can make use of the Javascript API to interact with Aunsight's Script Engine service. The Node.js Aunsight library has an AuQLScript model. See the repository for more information on this SDK and its use.