Many Aunsight objects support rich-text description fields using the Markdown format. Markdown is a simple and open standard for rich-text markup using plain text as its source medium. Markdown is an easy to learn standard, but users of the Aunsight Web interface have additional support in the form of a markdown editor tool. The markdown editor provides an instant preview of formatting effects and access to formatting codes by means of menu buttons at the top of the screen. 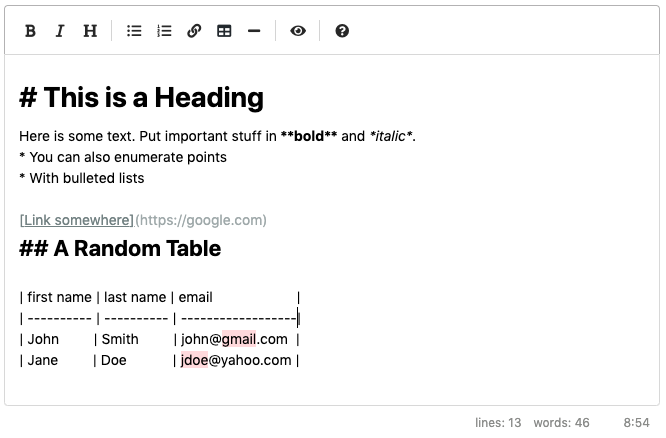 There are two basic options for formatting the typography of text in Markdown: Italic, bold, and bold italic. All three are formed by placing asterisks around the words to be formatted (*).

Headings provide logical structure and hierarchy to documents in addition to typographical distinctiveness. There are six levels of headings allowed by markdown, all formed by placing one or more hash marks (#) followed by a space before the heading title.

Lists and bullets allow the formatting of enumerated and iterated content. Both are fomred by placing each entry on a separate line and prefixing the entries with either an asterisk (*) for bulleted lists or a digit followed by a period (1., 2., 3. etc.) for numbered lists.

Hyperlinks can be created by placing a link description and URL within a pair of square brackets and parentheses.

A link to Google

Tabular information can be conveyed by placing text within an arbitrarily sized field of delimiters using dashes (-) and pipes (|) as horizontal and vertical dividers.

The first row or header is written out with pipes (|) separating each column name:

After the header row, include a divider row composed of pipes surrounding at least three dashes (|---|) to delimit each column.

After this, each row in the table can contain text of any length with fields separated by pipes (|).

Horizontal rules can be created by inserting three or more dashes (---) onto a line by themselves.